For years we have had standardized tests to gage learning in schools. Those tests are flawed.

Many teachers future are based in students success or failure on such tests. That can be good and bad. Teachers can not take the tests for students. Some students are good at tests and some are not. Does that mean the students are smart/dumb? No.

The United States is falling behind in math and science. Making teachers the content of the test does not make students smarter and does not accurately quantify students learning. If anything it wastes time learning having to take pre tests an actually test students at certain times.

Today it was -16 •F. The owner advised the guides to keep all the hunters in the trucks unless they had a shot. They informed the hunters that at that temperature our lungs could freeze and it we could die and it could be painful to breath if we stayed out to long. And it was painful if outside for more than a few minutes. Of course with the step mountain sides that we walked it was going to make things difficult tell it warmed a bit. We found a few deer and we were going I let my father in law (Jim) take a the shot at the buck since he had wanted a mule deer for years and since he paid for the trip only seemed right. Unfortunately, they must have been ghost deer because we lost them in the wooded area without any tracks or anything. So we had to hustle back to the car to get warm.

Almost two hours later we found more deer. We let Jim take the first shot and he hit him. He took another shot and hit him again. So we had to scale the side of the mountain at like 70 degree angle (not sure of the exact angle but it almost felt like 90). We followed the blood trail of here he should have been but could not find him. We had to slide down the back side of the mountain through the the thick timber and snow. There was not an option of walking down we had to slide on butts. We tracked the blood all the way to the road with no luck. We walked back to the truck and stared glassing (looking through the binoculars) to try and find the deer. We spent most of the morning and early afternoon trying to spot it. But with no luck.

During lunch Logan realized he had not brought water. He had a juice container that had frozen water in it but he had to put it next to the water to try and melt it. Of course he about melted the plastic to try and melt water. But we tried to give him some of our water but he was being stubborn. Of course his fire was more smoke than fire.

After much avail we decided to move on from trying to find that deer. We went on a short walk through the timber. We saw lots of tracks and some bedding a but nothing was moving. We talked to a number of other hunters and they had not seen anything either. So we spent the rest of the day driving with no luck.

We did see a few elk but they were females at the end of they day around 4:00PM. When we were heading to the road we saw a few deer but we could not get a clear shot at them.

We were all tired today. It was bitterly cold and it was warm in the truck. We decided to mostly stay in the truck and glass since and save our energy for when it mattered. Logan was exhausted as well from being up at the hospital with his sick son all night. After we had lunch and Logan was still working to earn his fire starting merit badge we started to perk up a little. We had seen a few animals on a distant mountain side but nothing we could go after. We were starting to wonder if we would ever find anything to fill the tags. The roads were pretty icy and slick in the narrow roads.

Too many Christians are confused about their religion…REALLY???

These examples aren’t breaking news in the world of Christianity but rather typical; the overwhelming majority of children raised in Christian homes throughout North America and Europe will abandon their faith during their teenage years or twenties (less than 4 out of 10 will come back to the faith later in life).

Christian friends of mine often refer to the era of the Reformation or the early years of the colonial United States as the golden years of Christianity; they romanticize the plethora of Puritan theologians and scholars, the high percentage of professing Christians in white Caucasian countries, and the… 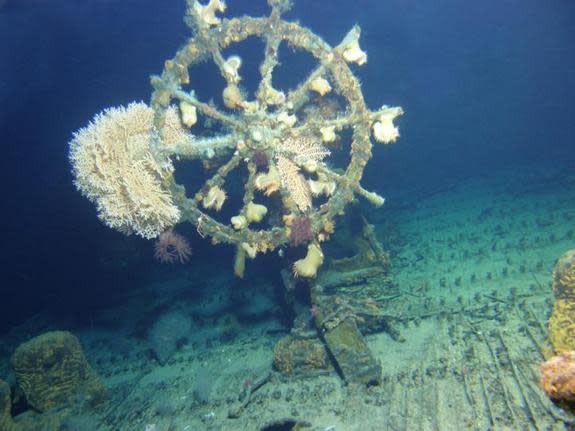 A “ghost ship” that has been lost beneath the waves for more than 60 years has been discovered nearly a half-mile below the ocean surface off the Hawaiian island of Oahu.

It is one of the three main streets of Ephesus between The Hercules Gate till to the Celsus Library.

When visiting Ephesus in Turkey I was greeted by the remains of a magnificent ancient culture and people of which today nearly nothing remains. Ephesus was an ancient Greek city on the coast of Ionia, three kilometers southwest of present-day Selçuk. It was built in the 10th century BC on the site of the former  Arzawan capital by Attic and Ionian Greek colonists.

The Temples of Dea Roma and
Divus Julius Caesar

According to myth the founder of Ephesus was a prince of Athens named Androklos, who had to leave his country after the death of his father, King Kadros. According to the legend, he founded Ephesus on the place where the oracle of Delphi became reality (“A fish and a boar will show you the way”). Androklos was a successful warrior, and as a king he was able to join the twelve cities of Ionia together into…